“The plan for building a homeland for the Jewish people must take into consideration the founding of a Hebrew cement factory as well”
— Altneuland, Benjamin Zeev Herzl

It took no small measure of vision and imagination for Benjamin Zeev Herzl to realize that in order to become an independent state that provides its own building materials, Israel had to have its own cement factory. In his book, Altneuland, Herzl noted that it would be best if the factory were built in Haifa, a city for which he predicted a promising future as a leading port city.

And indeed, the first bag of cement to exit the gates of the Nesher plant in Haifa in 1925 marked the start of Nesher’s long and fascinating history which is interwoven with that of the State of Israel.

From the development and building of the Jewish home in Israel, through Israel’s establishment as an independent state that supplies its own building materials, and up to the present, Nesher has supplied and still supplies most of the cement used in Israel today and employs hundreds of workers in its cement manufacturing plants. Nesher continues to promote local cement production using local raw materials while meeting most of Israel’s cement consumption requirements. 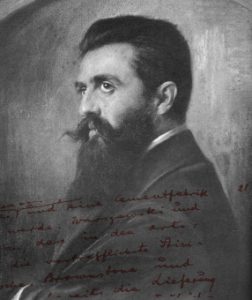 Seven Jewish businessmen establish “The Palestine Portland Cement Syndicate” in London after the samples collected by City Engineer Nahum Wilbush (Wilbushevitz) from the Mount Carmel and Kishon Valley region and his guide Mendl Hankin are found suitable for the commercial production of high quality cement.

חברי הארגון פונים לד”ר ארתור רופין, מנהל הכשרת היישSyndicate members approach Dr. Arthur Ruppin, head of the then Palestine Land Development Company (Hevrat Hachsharat Hayishuv), and ask him to speed up the purchase of lands needed for building a cement factory near the village of Yajour. A sum of 10,000 pounds is handed over to the landowners, the Khoury family, as a down-payment for the land. The building plans are submitted for approval by Bela Spiegel – an engineer, chemist and one of the managers of the Hungarian General Coal Mine Company, which owns a large, successful cement factory. 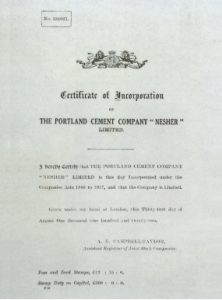 Michael Pollack, a wealthy refugee from the Russian Bolshevik revolution, joins the syndicate and is elected chairman. The Nesher Portland Cement Company Ltd. is officially registered in London.

Michael Pollack had visited Palestine prior to World War I and had already acquired shares in Shemen, a company that produced edible oils. He raised the plan for the cement factory with Baron Rothschild, who stated that he too would join the group of investors, provided that Pollack was be in charge of the factory. Dr. Haim Weitzman also encouraged Pollack to join the initiative, but it was only after meeting Bela Spiegel in Budapest and visiting the site of the future factory that Pollak decided to purchase the remaining land through the services of Yehoshua Hankin, the “land redeemer”, and other buyers. 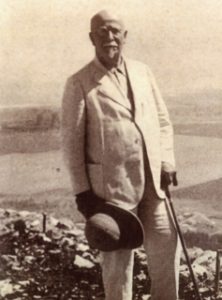 The construction of the first cement plant in Palestine begins and the first workers, Jews and Arabs alike, are in the process of being trained for their new jobs.

About three weeks after the works begin Bela Spiegel orders four vertical kilns from Berlin and Belgium, as well as a gravel crusher, mills and a desiccator – in fact, all the equipment needed for the cement production. Syndicate secretary Isaac Schneersohn is appointed local manager of the company in Israel. A detailed work plan is drawn-up for the next two years, with production scheduled to begin in early 1925. 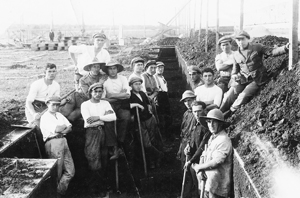 The first bag of Hebrew cement bag leaves the Nesher (eagle in Hebrew) factory in Haifa and Israel becomes a cement manufacturer. Subsequent laboratory tests find that the quality of the Israeli cement is excellent compared to the equivalent European product at the time.

The board of directors realize that the construction of the factory is over and they now have to withstand the tests of production, marketing and profitability assurance . Clear signs of an impending crisis, which were visible on the local economic horizon, tempered the joy of embarking on the new venture with concerns and fears about what the future held.

1950 – Foundation Stones of the State

With the establishment of the state, the massive waves of immigration and the building surge of the 1950s, Nesher decides to build a new cement factory near Ramla to meet the growing consumption of cement, to build the fledgling country, and to be closer to the center and south of the country.

Company management members visit Ramla, where unemployment was rife, in spite of David Ben-Gurion’s proposal that the second factory be built near Beer Sheva. Meir Privas, a senior Nesher manager who was familiar with the lime pits, the primitive kilns and the limestone deposits near Ramla from his World War II days, convinces the other managers that the Ramla site is suitable for the new plant as it is on an important crossroad and near to the raw materials. The news of the new plant raised hopes for a decent wage among the many immigrants living in Ramla.

The construction of Nesher Ramla was completed in July 1953 and the grinding of stone began; on 23 August 1953 the furnace was stoked, and in September that year customers took delivery of the first bags of cement from the plant.

The demand for cement skyrockets after the resounding victory in the 1967 Six-Day War, and Nesher acquires the Shimshon (Samson) cement factory in Har-Tuv.

The 15-year old Shimshon factory, which was based on the limestone deposits in the area, was placed in receivership in 1968 after reaching the verge of bankruptcy, and was acquired by Nesher for the purpose of restoring and reopening it. Nesher Ramla workers rose to the challenge, new kilns were bought and installed, a planning team was enlisted to train the workers and to get the factory back on its feet and even provided the core of the workforce for the new plant. The few remaining veteran Shimshon workers who were re-recruited by the restored company had to undergo considerable adaptation. The restoration took a long time and the large kiln was fired up for the first time only in September 1974. It was fully automated and equipped with a central control system. 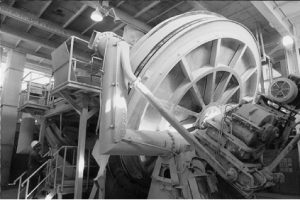 The Nesher Ramla factory sells one million tons of cement a year for the first time in Nesher’s history. The national undertaking of absorbing the wave of mass immigration from the former Soviet Union spells the beginning of the technological leap that characterizes Nesher at the close of the 20th century.

The growing demand for cement resulting from the urgent need to house hundreds of thousands of new immigrants from the former Soviet Union and Ethiopia continues to rise. Nesher workers step up their efforts by moving to a three-shift, 365-day and full capacity work routine to meet the demand, and the plan for building the first dry production line at Nesher Ramla is fast-tracked. As the 1990 sales were tallied it transpired that the factory had made history by producing one million tons of cement in just one year. 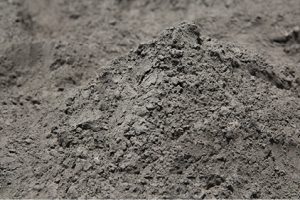 Dry Line No. 1 is inaugurated in Nesher Ramla. The dry manufacturing process involves grinding and desiccating the raw materials and transferring them to the kiln for baking without the use of water. This method facilitates tremendous energy savings and consumes only about half as much energy as the wet production process.

The choice of location for the first dry line in Ramla was based on the technological infrastructure, the nearby raw materials and on the factory’s marketing preferences. The plans for building the dry line were put on hold during the economic slowdown of the mid-1980s and the cornerstone for the project was only laid in October 1992 in the presence of the then Prime Minister and Minister of Defense Yitzhak Rabin. Over 2,000 people were involved in its construction in a broad spectrum of construction-related professions such as construction, metal works, electricity, instrumentation and control. Due to Nesher’s decade of experience worldwide, its engineers boldly introduced several innovations into the dry line, for example the massive use of fly ash from power stations as a raw material and use of process control systems. 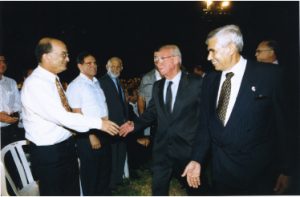 Nesher launches the second dry line in the Ramla plant despite a decline in the demand for cement in the latter 1990s.

The company declares its intention to switch to producing clinker solely with dry-line production processes and to shut down the wet kilns by the end of the decade. The decision was motivated by the desire to complete its technological re-orientation, to streamline production, increase manufacturing capacity and, most importantly, to reduce energy consumption in the cement manufacturing process. The cost savings on energy would enable Nesher to reduce the cost of cement to the customer and would free it from its dependence on imported clinker required for its manufacturing processes. In the second dry line, the engineers employed control systems for the large electrical motors and more advanced drive systems. They also made changes and improvements in the construction itself.

The dome of the stack silo, under which the raw materials for the line are stored, is built entirely from concrete and unsupported by interior columns. It is the largest structure of its kind in the Middle East – 107 meters in diameter and 30 meters high.

Nesher wins the Millennium Business Award for Environmental Achievement from the UN and the ICC and becomes the only cement factory ever to win the prize. According to the prize committee, “The company’s emissions records position it among the most advanced cement factories in the world and in the forefront of technological capability”. 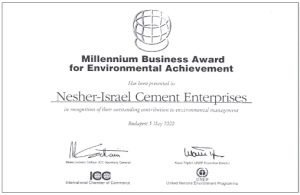 Nesher signs a strategic partnership agreement with the Irish CRH company, whose efforts are focused on expanding its investments in cement factories worldwide. Together with CRH, Nesher works with the World Business Council for Sustainable Development (WBCSD) to find quantitative indices, modus operandi and solutions for improving the environmental, social and economic performance of the cement industry.

As a company operating in a dynamic, changing business environment, Nesher must constantly adapt to the shifting business landscape and seek new foreward-looking revenue sources. In early 1996, MASHAV, Nesher’s parent company, purchased 50% of the shares in Taavura, which deals, inter alia, with transporting cement, and today it has an equal stake in the ownership and control of this company. Later on, Clal Industries purchased the control of MASHAV, and an opportunity arose for Nesher to investigate collaboration with an additional international strategic partner.

After a thorough due diligence process, the choice fell on the Irish CRH company with its estimated market value of $7-8 billion and its mix of building materials-related business interests. The partnership decision, which clearly reflects Nesher’s solid standing, was a window of opportunity to broaden Nesher’s horizons toward the overseas market with an eye to a global future.

Towards the end of 2015, CRH sold its holding in Mashav (Nesher’s parent company), and Mashav is now fully held (100%) by Klal Industries. 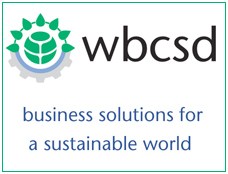 Nesher is the first and only company in Israel to issue an EPD, which signifies the company’s transparency and environmental policy. 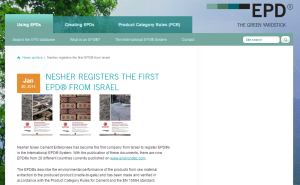 2015 – Industry in the Environment Award

Nesher receives an Industry in the Environment Award for its activity in field of alternative fuels. 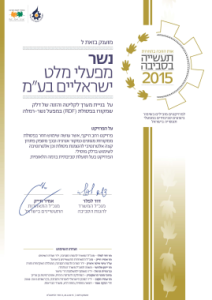