Nesher has invested over 500 million dollars since 1995 in upgrading its production infrastructure, in order to make the manufacturing process more efficient and environmentally friendly.

Nowadays the Haifa plant is used for milling cement from clinker, packing and distribution. Since 2000, there are no kilns in operation at the plant, and no quarrying activities are taking place in the adjacent quarries in the Carmel mountains.
The Haifa plant spans over about 40 hectares and includes storage facilities and grinding mills, with an annual grinding capacity of 1.2 million tons.

Nesher Ramla was the second plant established by the Company in the 1950’s in order to accommodate the needs of a state welcoming massive immigration and undergoing a great building momentum.

The Ramla plant has the highest production capacity of the company’s plants and currently includes two kilns and seven cement mills. Clinker is manufactured using two modern dry production lines, replacing the older wet production lines which had operated since the 1950s. The clinker is milled to cement and sold to the customers in bulk form and in bags.

Nesher has invested over 500 million dollars since 1995 in upgrading its production infrastructure, in order to make the manufacturing process more efficient and environmentally friendly. To this end a network of hundreds of installations was set up, reducing the amount of dust particles emitted throughout the manufacturing process, and modern production lines were built (the dry lines replacing the old wet lines). In addition, facilities for reducing nitrogen oxide emissions have been set up during the last few years.The plant began consuming electricity from a natural gas-powered power station in 2010, which now serves as the plant sole electrical energy source. 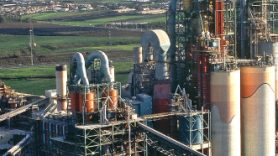 Cement is the product of heating limestone and clay to extremely high temperatures, then mixing the product with various additives Read More